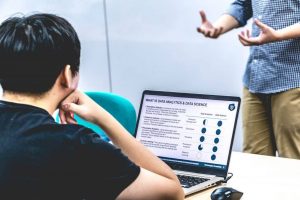 Programming is no where near being an easy career. With many people graduating each year from top computer science programs in the country, it’s one of the most competitive careers anyone can embark on. However, a programming career is also never boring as you are faced with new challenges with the advancement of technology. As you embark or consider a career in programming or data science, this list will save you some headaches and energy. Even if some of these points might not be relevant for you right now, they might be one day.

1. You learn by doing. The only way to get better at programming is to actually program. Don’t let an analysis paralysis prevent you from ever starting.

2. Programming isn’t like studying for a test. Memorizing stuff doesn’t matter all that much.

3. It’s absolutely okay to reference, copy and modify someone else’s code. Most programmers out there use Google to solve their problems too.

4. Learning by yourself is really tough. Talking about code and collaborating with other aspiring developers is a better way to learn for most people.

5. Don’t be afraid to write bad code. You don’t have to write the perfect code at the first try. Instead, focus on solving the problem first. If you have a working solution, level up the game and improve your code. Make it more readable, more maintainable and more expressive. It not only helps your co-workers; it also helps your future self.

6. Juniors don’t write worse code than seniors. As a junior, you may sometimes write the better code because you are solving the same problems all day long. Seniors are often called in to solve hard problems in different areas of a software product.

7. You don’t need 5 monitors. Don’t believe what you watch in movies, because you don’t need THAT many external monitors set up in your workspace to be a programmer. What you won now is probably good enough to start programming. Save your money for other stuff.

8. Work smarter. At times, the most straightforward solution does not involve a hundred lines of code. You just simply need to take a step back, and relook at your problem to unlock its best and most simplistic solution. Start small and improve. Don’t be too stuck on with the first attempt.

9. There’s a HUGE difference between an uppercase and lowercase letter. It may take a while to get used to noticing subtle differences between similar symbols, and such minor mistakes may get really frustrating but you’ll get the hang of it after awhile.

10. Always celebrate the small wins. Accomplishing a coding task can get really satisfying, and you have all the rights to celebrate them. So take a step back and admire the awesome things you have built along the way.

11. You’re never going to feel like you’re ready to program full time. This is also known as the imposter syndrome and it is real. However, be kind to yourself. It’s okay and absolutely normal to not know everything. The most important thing is understanding that you can figure out the stuff that you don’t know.

12. Programmers never stop learning. New technologies emerge all the time, so the programmers that succeed are the ones who continue to learn and develop their craft continually.

13. You don’t need to be a math genius. If you’re not a “math person,” that doesn’t mean that you can’t be a programmer.

There you have it! 13 Things You Wish You’d Known When You Started Programming. Want to get started with the basics of programming? Check out the wide range of data science and programming courses which you can choose from to kick start your programming interests! Alternatively, contact us to find out more about what the courses offer. What are you waiting for? See you in class.