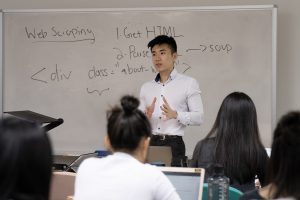 It’s no secret that Python is one of the most commonly used programming languages. For the past five years, Python has held the number one position as the “most popular coding language” used by data analysts, data scientists, and software engineers as it is not only simple to read and write, but also offers extreme flexibility and having an active online community of users and contributors. Making it a great language for new programmers to learn for a broad range of applications in data science. In recent times, many large organisations are switching to the Python-based framework as well. It is also used to build a wide range of web applications, from YouTube to Instagram and financial analysis tools. If you are interested in learning Python, then Hackwagon’s Data Science 101 is an excellent place to start with.

Java is one of the most popular OG programming languages that is often used for back-end development. It also holds a sizeable market share in mobile games and application development using Android and enterprise web development world. Although it is a programming language that is more difficult to learn than some of the others on this list, its broad usage and versatility make it a solid choice if you’re looking to get into apps or back-end development. Java is also used by some of the most prominent banks and insurance companies – yay to greater job opportunities! Furthermore, you can reach approximately 2.5 billion devices by writing Android apps.

C is a more general-purpose code language, while C++ is an extension to the original. Over the years, C became one of the most used programming languages. Besides, C is arguably the most foundational, disruptive and influential programming language in history and has influenced almost all other languages on this list. It is also commonly used for multi-platform development, since it’s so universally supported. Although it may be a little harder to learn, but this also means that there will always be jobs for programmers who know C/C++.