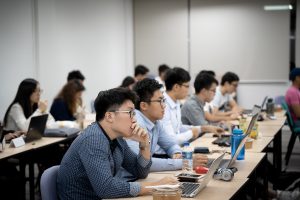 If you’re reading this right now, you’re likely to be interested in learning Python Programming. However, Python seem a little intimidating and that you still have a few questions in mind. So, we’re gonna take this opportunity to address 5 frequently asked questions that you might have.

1. Why is Python in such high demand?

Python is undoubtedly incredibly flexible and relatively easy to pick up as compared to other programming languages. Not only is it the most commonly–used language for data science (R coming in as a close second), it is also used in numerous industries. One reason for its widespread popularity is that it is one of the easier languages to learn and use when working with data. And, fortunately for both employers and people like you, it doesn’t require a 4 year bachelors degree like most traditional jobs.

2. Is it true that I need to be good at Math to Learn Python?

Absolutely NOT true! Although there has been rumours going around indicating that having natural talent for mathematics makes learning programming easier, it has been proven to be untrue. As mentioned above and in many of our articles, anyone can learn Python. Yes, even if you’re 50 year old or in an industry that is totally irrelevant to programming. We’ve seen learners with a wide variety of backgrounds attending our courses and succeed at what they do, so don’t let your own background stop you from giving Python a try!

3. Can you learn Python on your own?

Yes, it’s very possible to learn Python on your own. There are a wide variety of learning resources available on the web to help you learn Python for everything from game development to robotics. However, why not get an extra pair of eyes, or someone who can guide you along to pinpoint your mistakes? Codes can get relatively long and one missing comma or bracket can result in an error.

Teaching yourself Python is definitely possible, but it does take time. You also have to be sure that you’re writing code and applying what you learn in real-world scenarios, rather than just watching lecture videos and answering multiple-choice questions. Taking the right approach to learning Python can also be the difference between success or failure when you’re learning Python!

4. Is it hard to learn Python?

If you’re picking up programming for the very first time, Python is considered one of the easiest programming languages to learn. However, that doesn’t mean that it’s easy! While anyone can learn Python programming — even if you’ve never written a line of code before — you should expect that it will take time, just like how you’d pick up a brand new linguistic language. So do expect moments of frustration, after all it’s something new to you.

We recommend learning Python 3. While some outdated learning resources still teach Python 2, this version of the language is no longer supported, and security vulnerabilities will not be patched. Therefore, you should learn the most up-to-date version of Python, which is Python 3.